With a new update coming to Call of Duty tonight, it is time to take a look at what loadout you and your squad should be rocking right now. Currently, the game is in a weird state that we have quite honestly, never found ourselves in before. Throughout the seasons in Verdansk, everyone has known about the two to three guns that have an enormous advantage over the others and have added them to their lineup. It also seems that as soon as any new gun comes out, overnight people have it completely leveled up and ready to go for the next day. We do this because of the anticipation that this new gun could in fact be the next meta. However, we are in that weird space right now where there is no cut and dry meta, as there has been in the past. You can run a variety of weapons and still drop solid amounts of kills and rack up decent damage.  On top of this, most of the guns that you should be using right now are guns from previous seasons, so there is a good chance that you already have them unlocked, leveled up, and ready to go.

First off, we have our beloved perks. It is sometimes forgotten or a stepped over part of the game. There are many different tactics to use when it comes to which perks you want to equip. If you are a player who is mainly used to just casually playing and wanting a solid perk setup, then you can’t go wrong using Overkill, Amped, and Double Time. This is the standard perk setup for Warzone players and has been since the first day of play. Next, if you like a faster paced gameplay and tend to play a little more reckless to get higher kill games, you should pick up that first perk setup at your first loadout followed by Overkill, Double Time, and High Alert. Now before you start disagreeing, try it out for yourself and let us know what you think. 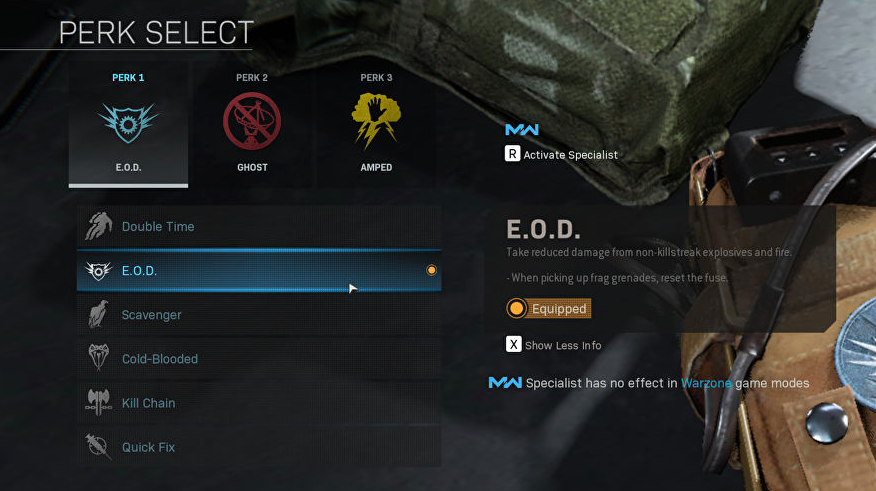 High Alert lights up the side of your screen, yellow, that an enemy is aiming at. I have found that it is more beneficial to have High Alert instead of Ghost because by the time that you get a chance to pick up your second loadout, the lobby has thinned out to the players that actually understand the game. This means that even if you pick up ghost, the competent players around you may have a little harder of a time trying to find you, but when they do then it will mean that your purpose of ghost is obsolete. In that position, the other teams might find you quicker, but you will know every time when they even look at you. It is truly like having eyes in the back of your head. Finally, if you want to sprinkle a little something extra in, you can always swap out Double Time for E.O.D. I will get more into the reasoning for this perk in the next section, but essentially everyone uses stun grenades, thermites, or semtexes. I personally haven’t adopted this strategy yet, but I understand the reasoning for why some players use it.

I can bet that almost everyone reading this has had their rage moments in Verdansk come from being immediately finished or having one of the following used against them. When I say that, I of course mean when people run Stun grenades, thermites, semtexes, and throwing knives. The lethal meta has always been changing, but recently it has solidified into a certain group. At this point in Warzone, the average player runs either throwing knives or thermites. I usually see more thermites but I personally rock the knife. It is very simple and quick to immediately eliminate a player after you have downed them and solidify that kill for yourself. However, that really is the only purpose for it and it leaves you at a disadvantage to players who run other items. 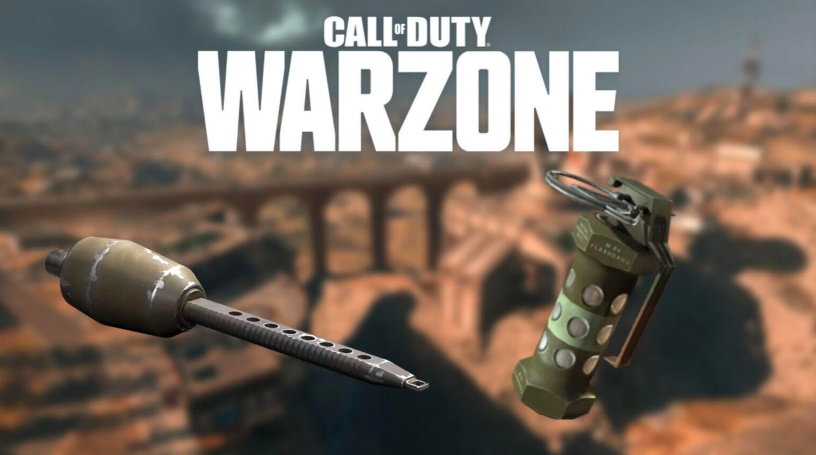 Thermites on the other hand, can be used to do the same job just not as effectively. They can also be used in situations where you need to get some easy damage from mid range. For tacticals, I would say that if you are still learning the game or don’t like to run and gun, the heartbeat is obviously still the answer. If you like to play recklessly and push anybody and everyone (Like me), stun grenades are a must. When used properly, they incapacitate your enemies and give you an advantage for a quick second.

When it comes to the actual weapons that should be used while running Warzone, this is where I think it can go in a million different directions. In this slot, you can use weapons in many ways, but I believe that you should use this slot to help compliment your play style the most. If you like to go for those high kill games, you are probably using a SMG or an AR that is built out to run like an SMG. If you are a slower paced player and try to just win at all costs, then an SMG is probably a safe bet as well. Whichever player you are, I would suggest using the Modern Warfare MP5, Mac-10, or Bullfrog. Right now I am running the MW MP5 but I think that if you are using one of these three SMGs, you can’t go wrong. Here are their loadouts:

Last but certainly not least, all of our beloved primaries. As I have said before, the reason for this article is because of how many options there are for the current state of warzone. When it comes to primaries currently, some weapons are better than others on console and visa versa. Some can even be better depending on your settings, so take these weapon choices with a grain of salt and try them out for yourselves. It is all about what you feel comfortable with and have at your disposal. Right now, you need to be running one of either three AR’s, one marksman rifle, or two sniper rifles. Here are the weapons and their respective classes:

Now that you all know what’s up, drop into Verdansk with a variation of these loadouts and let us know what you think. Have fun out there, keep gaming, and I will see y’all soon.